Implementing Conflict Management within the Teams 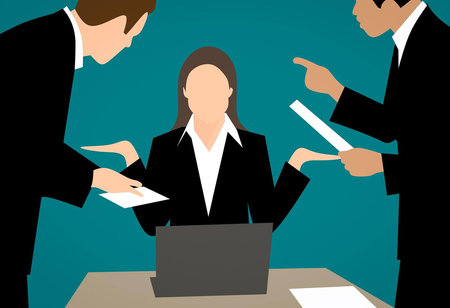 Conflicts may arise in several situations in the workplace; it is a situation built when the ideas or concepts are not accepted by all the members within the team. Sometimes the approaches developed by a leader or any other team member may not be well-received and approved by all the teammates as they may dislike or find it irrelevant due to several reasons. In such circumstances, a leader or team head has to build and apply strategies that will dissolve conflicts raised within the team. Hence, implementing conflict management strategy within the teams can dissolve interpersonal differences or disagreements created inside the teams at the workplace.

A team leader has to look after the existing conflicts and the ways to resolve them and bring all the team co-ordinates on the same page and spread out peace between the co-workers of a team. Conflict Management Process includes certain steps to be followed mentioned below –

1. Understanding the Level of Conflict:

Initially, the team leads can avoid unnecessary arguments or discussions that can be developed in the later stages of the conflict. A team head can ask both parties to communicate and put forward their point of view and the reason for existing conflicts and understand the level of conflict. When the leader completely understands the level and grounds of the conflict he can come up with effective ways to resolve the conflict.

Another way of solving the conflicts is by making both the parties or employees understand each other’s perspectives and the logic behind their points of view. This can help the interpersonal teammates clear their approach to the opposite person and move further united as a team in achieving organizational goals.

Taking feedbacks from the other teammates present in that particular situation where the conflicts raised can make it easier to solve the conflicts. A leader following Conflict Resolution strategy in a team has to consider the feedbacks because that can give him/her different scenarios in understanding the complexity of the conflicts.

Also, a team leader should examine the present conflict in brief and after resolving conflicts they should ensure that preventive measures are been taken to avoid such or any other conflicts that may arise in the future.

Some of the situations where conflicts may take birth are when two or more teammates are not been convinced with the concept proposed by their team lead or a co-existing teammate. Also, at times personal rivalries may turn out as major conflicts between the teammates which may disturb the harmony of a team and lead to several arguments. There are several reasons that can create conflicts and the team leaders have to observe Essential Conflict Resolution Steps to solve resolve them. Also, a leader has to follow certain Principles of Conflict Resolution which can help them in finding a relevant and valid solution for the existing conflict.