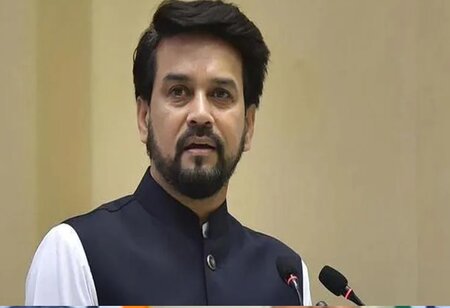 Union Minister of Information and Broadcasting, Anurag Thakur, on the second day of his visit to Dubai, met CEO of e-Vision, Olivier Bramly and has invited his company to India, assuring policy support if required.

During the meeting, Bramly gave an overview of Etisalat to Union Minister Thakur.

He said that the company has over 150 million subscribers in MENA (Middle East and North Africa) region. In the UAE, they are majorly into IPTV and also have been growing strongly in the OTT segment. The company is also investing into sports channels.

Bramly mentioned that India has many opportunities but there is an issue with the "complexity" of their project and time to market.

Tata Play CEO Harit Nagpal, who was also part of the meeting, invited e-Vision CEO to visit Mumbai and experience Tata Play's concept of "Binge TV". He mentioned that Tata Play is ready to provide the hardware and middleware to e-Vision and to collaborate to bring the company's concept to India.

Hungama Digital Media founder Neeraj Roy proposed that e-Vision can telecast the major programs of 75 years of India's Independence called Azadi ka Amrit Mahotsav to UAE and other countries of the region.

Sanjiv Shankar, Joint Secretary (Broadcasting), Ministry of Information and Broadcasting was also present during the meeting.