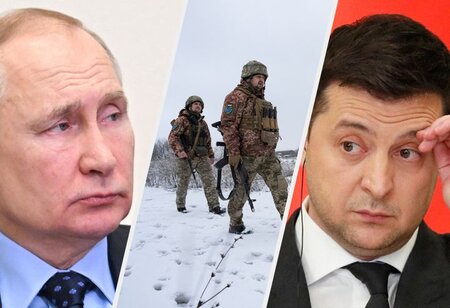 The Russian attack on Ukraine has harmed stock markets while driving up crude oil, basic metals, and agricultural products prices. With Russia's increasing invasion of Ukrainian territory, the West's sanctions have affected global supply networks. Given India's export revenues on crude oil, natural gas, gems and jewellery, culinary oils and fertilizers, and a declining rupee, the ongoing situation in Ukraine is expected to increase the country's import costs past USD 600 billion this fiscal year, according to a study.

The Black Sea port sector, which is an important part of the supply route for commerce from former Soviet states to Europe and Asia, has had its functions halted as a result of the continued conflict. Meanwhile, Maersk, a large shipping corporation, has ceased operations in Russia. The Ukraine-Russia war has had an impact on Indian businesses, which has had a negative influence on the economy.

Impact of Ukraine-Russia on Indian Economy

India would be in a tough situation as a result of these complicated events and war between Russia and Ukraine. The surge in gasoline and utility costs would have an enormous effect on India's inflation. As supply constraints intensify as a result of restrictions and the conflict situation, other prices will increase as well. Because of the uncertainties, the financial market will decline. Capital inflows into the economy will decrease, causing stock markets to fall further.

The following are some of the key industries have been impacted as a result of the current war between Ukraine and Russia: -

1. Crude Oil –
Russia is the world's third-largest crude oil exporter. Crude oil prices rose to a seven-year high of $110 a barrel following Russia's annexation of Ukraine. The Brent crude oil standard was selling at $110.23 per barrel after the Russian invasion. In India, many industries rely on crude oil, and paint manufacturers, oil producers, and fertilizer producers are among them. 85 percent of India's oil needs are met by imports. According to the Economic Survey 2022, India's GDP growth rate in 2022-23 would be between 8.0 and 8.5 percent, assuming crude oil prices remain in the $70-$75 per barrel range. Crude oil's surpassing of the $100 per barrel milestone will have a severe impact on these industries. Also, war between Russia and Ukraine Has been negative to the Indian economy since it would raise the government's price of imports.

2. Edible Oil –
Sunflower oil is mostly produced in Ukraine and Russia. India bought a total of 18.93 lakh tonnes of crude sunflower oil between November 2020 and October 2021, of which Ukraine supplied 13.97 lakh tonnes and Russia exported 2.22 lakh tonnes. Sunflower oil consumption and supply have been influenced by the current Russia-Ukraine crisis. Furthermore, edible oil producers are considering importing edible oil from other nations. They also propose the use of various cooking oils, such as palm and groundnut oil, to keep retail costs from rising.

3. Agricultural Products –
The area of Russia-Ukraine is a significant supplier of several important agricultural products across the world. According to Reuters, the area accounts for more than 30% of world wheat commerce, 32% of barley, 17% of maize trade, and more than 50% of sunflower oils, seeds, and grains trade. The supply chain for these commodities has been disrupted as conflicts between Russia and Ukraine have risen. The European Union has repeatedly warned that the agri-food sector will suffer as a result of the Russia-Ukraine conflict. In India, pantry staples like pasta, wheat, and bread are expected to turn out to be even more costly.

4. Automobile Industry –
Ukraine and Russia are two of the world's leading semiconductor exporters. According to research by Moody Analytics, whereas Russia contributes essential metals such as palladium to the semiconductor sector, Ukraine provides unique gases like neon and helium, which are necessary for chip manufacturing. As the continuing conflict between Russia and Ukraine intensifies, the semiconductor industry will face a huge proportion of the impact, with chip-dependent industries such as automobiles and information technology particularly hard impacted. Before the crisis, there was a global shortage of semiconductors. According to the research, costs for neon gas have increased tenfold as a result of the continuing Russian-Ukraine situation, potentially affecting vehicle manufacturing in the Asia-Pacific area.

5. Base Metals Industry –
Because of the current Russia-Ukraine situation, base metal prices are expected to rise. The most recent causes are international conflicts between Ukraine and Russia, that have resulted in high volatility across various asset sectors. Selective metals already had very strong fundamentals before the Russia-Ukraine conflict intensified, and there is a chance that the US and its European allies would declare more sanctions against Russia. In 2021, aluminium prices increased by nearly 40%, and in 2022, they increased by 20%.