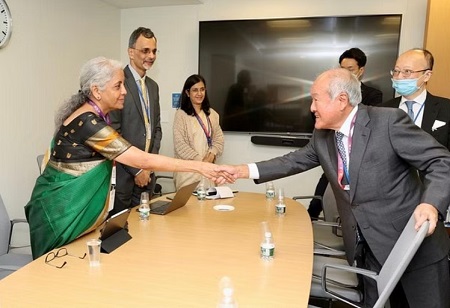 Union Finance Minister Nirmala Sitharaman on Wednesday held bilateral meetings with her counterparts from Japan, Saudi Arabia, the Netherlands, and South Korea as part of the Indian efforts to strengthen its economic ties with major countries of the world.

Being held on the sidelines of the annual meeting of the International Monetary Fund (IMF) and the World Bank, the finance minister, in addition to bilateral issues, discussed with them some of the major economic challenges being faced by the world, prominently the energy crisis and inflation in the wake of the Ukrainian war, debt sustainability, and climate change.

India’s emergence as a bright spot during the current global downturn and some of its successful policies such as digitisation and direct cash transfer were appreciated by her counterparts.

The finance minister used the occasion to get feedback from these leaders as to what role India could play next year as the chair of the G-20 group of countries.

During her meeting with the Japanese Finance Minister Shunichi Suzuki, the finance minister said that 2023 brings greater responsibilities for both countries on the world stage.

Sitharaman told Suzuki that this year is special for India-Japan bilateral relations as both countries are celebrating the 70th anniversary since the establishment of diplomatic relations as well as India celebrating 75 years of Independence.

Sitharaman in her meetings with South Korean Finance Minister Choo Kyung-ho discussed possibilities for G-20 finance in 2023 and sought his country’s support when India holds the group's presidency.

During the meeting, she invited Kyung-ho to India for the 6th India-South Korea finance ministers meeting.

In her meeting with Saudi Arabia's Minister of State for Finance Mohammed Al Jadaan, the two leaders discussed several economic and financial issues, along with matters of India-Saudi bilateral cooperation.

Sitharaman also held a meeting with the finance minister of the Netherlands, Sigrid Kaag, who has been invited by India as a guest country to G-20 under India's presidency.

Sitharaman said she looked forward to engaging with the Netherlands in the G20 process for their valuable contribution.

During her meeting with her Bhutanese counterpart, Lyonpo Namgay Tshering, Sitharaman said India looked forward to expanding bilateral cooperation between the two countries to new and emerging areas such as space, digital technologies, financial sector, health sector, as well as tertiary education.

Sitharaman reiterated that India would like to take forward and further deepen the India-Bhutan bilateral relations for the development and well-being of the people of the two countries.

He also thanked India for the Bhim UPI and Rupay rollout in Bhutan.

Sitharaman also attended a meeting of the Financial Action Task Force (FATF) chaired by Raja Kumar from Singapore as the country currently holds the presidency of this body.