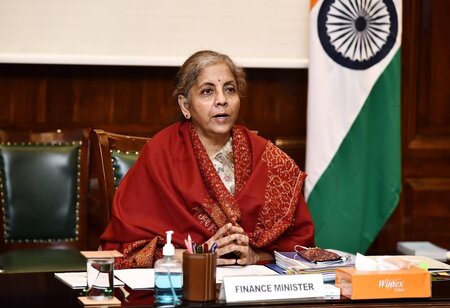 Finance Minister Nirmala Sitharaman had held a virtual interaction with Chief Ministers of States and Lieutenant Governors of Union Territories (UTs) on Monday. Chief Ministers of 15 States, Deputy Chief Ministers of three States, Jammu and Kashmir L-G Manoj Sinha, and finance ministers of other States marked their presence at the meeting on November 15. The meeting revolved around the robust growth witnessed after the second COVID wave and the ways in which it could be sustained.

The dignitaries of the states that were present at the meeting proffered their ideas as to how sectors of investment, development and manufacturing could be taken to new heights while maintaining resilience. Some Chief Ministers even requested for frontloading a part of the tax devolution for the current financial year, in order to increase the states' capital expenditure. The need for offshore wind energy generation policy was highlighted by some states.

The key points of the meeting was:

While speaking to the press after the meeting, Finance Minister Nirmala Sitharaman spoke on the suggestions put forth by different states. Sitharaman mentioned that the session was very useful as it helped understand how the states will function post the Coronavirus pandemic. The Finance Minister stated, "The way in which we have frontloaded many of the dues of the states have been recognised. Some of the CMs requested for increasing the states' capital expenditure. They said it would be helpful for them to get a part of the tax devolution. I have directed the finance secretary to do this immediately."