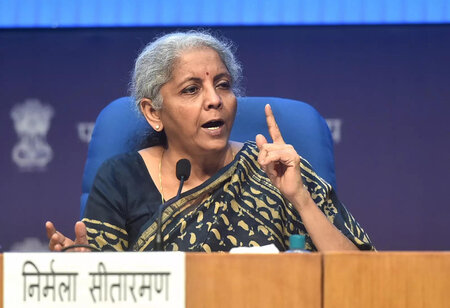 Finance minister Nirmala Sitharaman on Wednesday has met the heads of the public sector banks (PSBs) and reviewed the financial performance and progress which is made by them in supporting the pandemic-hit economy. The minister took stock of the banking sector and progress on the restructuring 2.0 scheme announced by the Reserve Bank of India (RBI).

Praising the GST officers for their continued efforts even during the pandemic and maintaining collection momentum at over Rs 1 lakh crore per month, the finance minister stated that GST collections at Rs 1.10 lakh crore will be the new normal. Sitharaman also declared the results of Ease 3.0 (Enhanced Access and Service Excellence) Index for 2020-21 and launched the Ease 4.0.
Ease is a common reform agenda for PSBs aimed at institutionalising clean and smart banking.

Here are the key points from Sitharaman's address:
* Nature of banking is changing rapidly, industry has also realised the changing requirements of the sector: FM
* Requested the public sector banks to address the needs of exporters: FM
* Banks have been directed to interact with Export Promotion Agencies as well as with bodies of industry and commerce so the requirements of exporters can be timely well-addressed: FM
* Banks have been also been directed to interact regularly with Federation of Indian Exporters Organisation so the exporters don't have to shuttle between various bankers: FM
* With changed times, now industries have option of raising funds even from outside banking sector: FM
* Banks themselves are raising funds through various avenues. These new aspects need to be studied to target credit where it is needed: FM
* Sunrise sectors need banking support and we have asked banks to identity and provide the requisite financial assistance to them: FM
* Collectively PSBs have done very well. Today they are able to show clear profits: FM
* Individually also several banks have done very well. They have shown that they are now in a position to go to the market to raise money for their growth capital requirements: FM
* Even though PSBs were caught up in extending DBT beneficiaries during pandemic, the amalgamation work has not suffered and the process has been completed.
* All banks are sufficiently endowed and customer service has not suffered even during the pandemic: FM
* Fintech is one sunrise sector which can provide technological help to banks as well as can benefit from help from banking sector: FM
* Logistics, export needs of North Eastern states needs to be looked after individually. As Prime Minister has suggested banks need to cater to demand of organic fruit sector of North east, market reach for north eastern products: FM
* GST collection of Rs 1.10 lakh crore per month will be the new normal: Sitharaman
* Proposal for enhancement of family pension and employer's contribution under the NPS is approved by finance minister. The benefits would now accrue to family pensioners: Debashish Panda, secretary, department of financial services
* Pension payout to bank employees has been hiked by a uniform slab of 30 per cent of the pensioner's salary: Panda
* Cap on pay has been removed and uniform slab of 30 per cent will be in force. Pension can go as high as Rs 35,000: Panda
* There will also be 40 per cent rise in contribution of employer (Banks) in NPS. It will go up from 10 per cent to 14 per cent: Panda