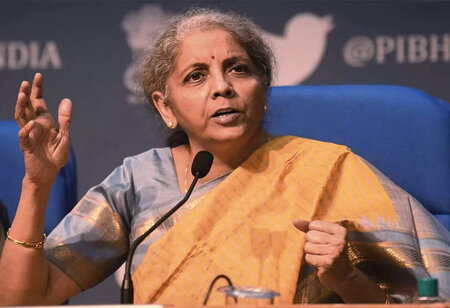 Providing details of the cut in excise duty on fuels, Finance Minister Nirmala Sitharaman on Sunday said the excise duty cut of Rs 8/litre on petrol and Rs 6/litre on diesel has entirely been made in Road & Infrastructure Cess (RIC), which is not shared with states and hence, the burden lies with Centre. The duty cut, effective Sunday, has a revenue implication of Rs 1 lakh crore annually for the Centre, which coupled with the earlier duty cut of November 2021 will result in a total revenue loss of Rs 2.2 lakh crore a year, she said.

Opposition leaders had said that this round of excise duty cut would reduce the share of states in central taxes.

The excise duty reduction on petrol and diesel effective Sunday has entirely been made in RIC and this was the case even in November 2021 when tax on petrol was cut by Rs 5 and that on diesel by Rs 10, she said. “Basic Excise Duty (BED), Special Additional Excise duty (SAED),Road & Infrastructure Cess (RIC) and Agriculture & Infrastructure Development Cess (AIDC) together constitute Excise Duty on petrol and diesel. Basic ED is shareable with states. SAED,RIC & AIDC are non-sharable,” she said.

As per the tax sharing formula, 41 per cent of taxes collected by the Centre is shared with states, while cess collections accrue to the Centre. Cess constitutes the majority of the tax on petrol and diesel.

Before this round of excise duty cut, Central and state taxes accounted for about 43 per cent and 37 per cent of the retail price of petrol and diesel, respectively in Delhi. States apply an ad valorem VAT or sales tax on the base price, freight charges, excise duty and dealer commission on petrol and diesel. Therefore, state collections also increase/decrease as the Centre hikes/reduces excise duties.

Former Finance Minister and Congress leader P Chidambaram had on Saturday evening stated that the cut in excise duty was “equal to rob Peter more & pay Peter less!” “FM’s exhortation to States is meaningless. When she cuts Central Excise by one rupee, 41 paise of that rupee belongs to the States,” he had stated. On Sunday, he tweeted stating that contrary to what he said on Saturday “the entire burden of the reduction falls on the Centre. To that extent, I stand corrected. The states are getting very little by way of share of duties on Petrol and Diesel. Their revenue is from VAT on Petrol and Diesel.”

“The Union Government’s levies on petrol have gone up substantially in the past 7 years. Though the revenue to the Union Government has increased manifold, there has not been a matching increase in the revenues to states. This is because the Union Government has increased the cess and surcharge on petrol and diesel while reducing the basic excise duty that is shareable with the states,” Tamil Nadu Finance Minister Palanivel Thiaga Rajan said. “TN VAT is partly in Rs/litre & partly as % of price (13% Petrol & 11% Diesel) including union taxes (incl cess & surcharge). So Union cuts Re 1, our VAT goes down 13(P) & 11(D) paise,” he tweeted.