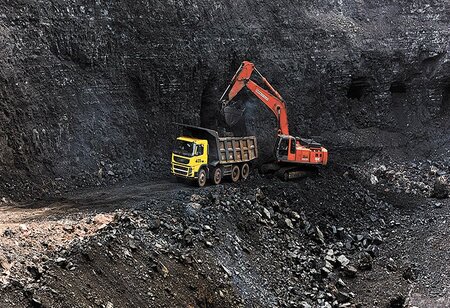 Amidst the coal crisis where the Centre has invoked an emergency law to operate idle coal import-based utilities, energy transition experts believe the electricity generation for 1.35 billion people based on expensive imported coal for blending is commercially unviable -- both high and inflationary.

They say combined with the global pandemic and the Ukraine-Russia war, which has increased coal prices internationally, it should be a death knell for coal. The time to ramp up wind and solar is now so that India is prepared to deal with a warming world.

Heatwaves are sweeping across India, with March recording the hottest in 122 years, resulting in high energy demand touching 207GW in April-end, the worst crisis in over six years. Demand is far exceeding supply resulting in power outages by state DISCOMs.

With imported coal prices at an all-time high, DISCOMs are wary of buying expensive power.
The experts told IANS on Sunday that it is counter-intuitive that the government is actually looking to auction new mines, re-open old mines and old thermal power plants, which will not only create stranded assets but exacerbate climate change.

Rather it should be looking at better energy planning, and diversifying the energy mix keeping in mind emissions, global disruptions and the inflationary nature of fossil fuels.

Power Ministry officials say the installed capacity of electric grid is close to 340 GW. Seventy per cent of this is coal powered. There isn't enough supply is what is being said. The reality is there isn't adequate planning due to which coal transport is delayed and power generators can't transmit power in time.

No more coal mines are needed in reality although Union Coal and Mines Minister Pralhad Joshi last week proposed to sell 20 abandoned mines with extractable reserves at 380 million tonne, with an intention to extract 30-40 million tonne.

The reason for opting the dirtiest fossil fuel is that India, world's third largest energy consumer with electricity demand growing by 4.7 per cent each year, is going to be tough to put new money into renewable energy.

But experts believe this is exactly what needs to be done with the pathway that the coal sector is facing investor challenges on funding, challenges on logistics and planning, as well as volatility in prices.

Sounding a cautionary note, International Institute for Sustainable Development Policy Advisor Balasubramanian Viswanathan said: "In the midst of the power shortage crisis, we need to take whatever short-term measures are available to keep the fans on. But some interventions have medium- and long-term implications, and here we must be very careful.

"We absolutely must not make new investments in our coal-dependent power system, which will just contribute to worse crises in the future. From a purely financial perspective, there is also a big risk of stranded assets. The government should instead drive investments at scale in renewable power and further incentivise grid-balancing technology, including battery storage."

Believing India needs to aggressively invest in renewables -- from 10-12 GW per year to 35-36 GW per year, WRI India, Energy Program, Director Bharath Jairaj said: "If we are to meet the 2030 target of 500 GW of non-fossil fuel capacity, we have to aggressively support investments in energy storage and re-introduce favourable regulatory conditions for rooftop and behind-the-metre investments in renewable energy."

It is not a shortage of coal, says Aarti Khosla, Director with New Delhi-based Climate Trends.

"Neither is it a shortage of power capacity. Combined with the global pandemic, and the Ukraine-Russia war, which has increased coal prices internationally, it should be a death knell for coal but ironically it is our only option to bring more power on immediately. The time to ramp up wind and solar is now so that we are prepared to deal with a warming world," Khosla told IANS.

Sunil Dahiya, analyst with the Centre for Research on Energy and Clean Air (CREA), said it is time to ditch the dirty and embark on an accelerated energy transition journey for true energy security.

"Generation based on expensive imported coal or gas or buying expensive power at exchange is commercially unviable. DISCOMs should buy cheaper renewable energy and supplement it with flexible generation sources," added Vibhuti Garg, an Energy Economist (Lead India) with the Institute for Energy Economics and Financial Analysis (IEEFA).