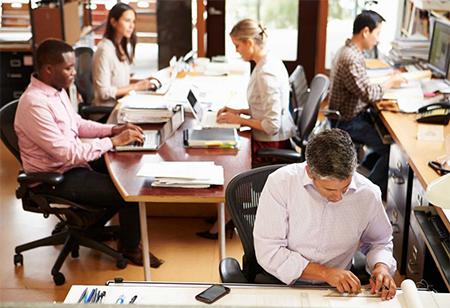 Captive centres in India of global firms have hired nearly 1.3 lakh people last year and they have overtaken for the first time in a decade the number of people hired by Indian IT services and back-office companies, said industry experts. The shift is attributed to a sharp rise in hiring by existing and the new global in-house centres (GICs) due to technology innovation activities in India for their global markets.

Two prominent staffing agencies have confirmed that GICs have recruited highest number of people in 2017 and the number could go up to 1.4 lakh. Last year’s hiring by GICs has been the highest in a year. The $167-billion IT-BPM sector, which has been one of the largest job creators and recruited large chunk of fresh engineers in the past, hired 1,00,000 people in 201718, as against 1,73,000 during the year-ago period.

In 2015-16, the IT-BPM sector hired 2,00,000 people. IT services industry body Nasscom said the sector witnessed a decline in hiring as Indian IT services companies such as InfosysNSE -0.31 %, Tata Consultancy ServicesNSE 1.56 %, Wipro, HCL Technologies and others shifted focus from “scale to skill”.

“While hiring by pure-play India-based technology services players was muted, Indian GICs have hired nearly 1.3 lakh people to strengthen operations, drive economies of scale and to some extent, drive innovation. This clearly is one of the characteristics of the third phase of evolution of GICs, where they themselves augment the capacity they need at favourable cost points rather than depend on pure-play services companies for augmented capacity,” said Santosh Thangavelu, senior vice president, Teamlease, a prominent staffing agency.

Companies in financial services and other sectors such BNP Paribas, Barclays, Royal Bank of Scotland, Shell, JC Penney and AstraZeneca have added thousands of people over the past year promised more jobs in new facilities. Barclays Global Service Centre, which employs more than 16,000 people across Pune, Mumbai, Chennai, and Noida, recently announced a new facility that could accommodate 8,800 people once fully used.

Shell, which employs 9,000 people in India including contractual staff, said its information technology hub in Bengaluru is key to realizing the opportunity of digitization which is transforming conventional business models.

It said more people are being added to the Bengaluru center. Last year, 1,10,000  to 1,40,000 jobs were created by GICs across all sizes and focus areas, said Francis Padamadan, senior director, Asia Pacific, KellyOCG.

Padamadan added that captive centers set up shops with small teams and eventually expanded to larger teams as they gained prominence in the global market. “One of the key European bank started with a 200-seater officer and now has nearly 5,000 people team in Gurgaon,” he said. Nasscom stated in its strategic review that India saw 65 new centres, a 63%  jump over the previous year and nearly a quarter of all centres were set up by US-headquartered firms.

“There was a wave in 2006 when GICs came in and started ramping up. They stabilized in 2014 and subsequent two years. In 2017, another wave of GICs started and at least 20 prominent GICs that came up in 2016 are ramping up now. The global enterprises are looking at their India centers as a harbinger of digital technology transformation,” said KS Viswanathan, vice-president, industry initiatives, Nasscom.

He strongly believes that these GICs have started hiring for product engineering, and research and development talent for these segments at scale. Engineering and research and development jobs have contributed largely to the near 1.3 lakh jobs. “ER &D GICs have 3,80,000 people and the growth in that is about 12.5%. This number has grown because the type of talent they need is not easily available in their headquarters,” said Preeti Anand, head, engineering practice, Zinnov.