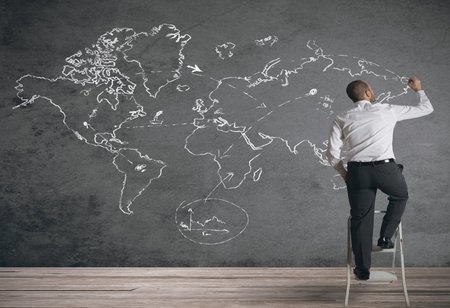 KPMG International has conducted its third annual survey of business students studying at some of the world's leading universities in 23 different countries. Ninety-three percent of the students, all on the verge of entering the workforce, said that they were concerned about the impact of ongoing geopolitical risk and instability on their careers. Despite this finding, they maintained a global outlook, with nearly the same number (89 percent) saying they would be prepared to move regularly to a different country for the right job opportunity. Eighty percent also said they expected to work in 3-6 countries during their career.

This year's survey also showed that a significant majority of students would consider working for the same company for their entire career (70 percent), with 20 percent of those even saying it was likely, or indeed very likely. The students also showed they have a focus on the future, 64 percent already have a clear idea of what profession they want to work in. Finance (37 percent) and Professional Services (27 percent) were two industries the students labeled as most desirable to them. Technology, which in 2014 was favored by 18 percent of students, had less appeal in 2016 with only 8 percent picking it out as a desirable industry to work in. This is despite the fact that among the students, 66 percent said they expected the technology sector to be the most successful over the next 20 years, professional services (15 percent) and finance (10 percent) both ranked well below this.

Rachel Campbell, KPMG's Global Head of People, speaking from Dubai, where KPMG is this week hosting the final of KPMG's leading student International Case Competition said, "I think it's really interesting that the vast majority of students would consider working at the same company for their entire career. Millennials and Gen Y are seeing the value that large multinational organizations can bring to their careers.  As businesses grow their global footprint and service offerings, people now have a greater opportunity than ever before to have several different careers within one organization."

"This finding was backed-up when we asked the students to rank the most important factors in choosing a company to work for; career opportunities, professional challenges, continuous training and having an international mobility program, all ranked in the top 10. The other significant finding was that students (88 percent) are really passionate about working for a company that contributes positively to the world, with 90 percent saying it was important that that the work they do in future drives positive and sustainable change in society."

The winner of this year's KPMG International Case Competition (KICC) will be announced on Thursday 14 April, by John Veihmeyer, Chairman, KPMG International. "KICC is the largest business case competition of its kind," said Veihmeyer. "KPMG has been running this event for 13 years and it's always incredibly rewarding to see these students grow in confidence as they analyze and present their solutions to a panel of KPMG Partners. It brings to life just how talented these individuals are."