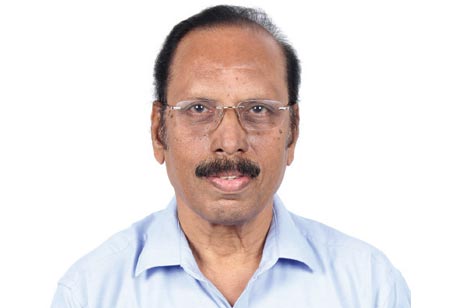 With over 50 years of work experience, Dorairaj has been involved in the agricultural field since 1968

The Economy of India is the 6th largest in the world measured by nominal GDP and the third largest by purchasing power parity (PPP) after USA and China. The long term growth prospects of Indian Economy is positive due to its young population, corresponding low dependency ratio, healthy savings and investment rates and increasing integration into global economy. India has classified and tracked its economy and GDP as three sectors - agriculture, industry and services.

India has one of the fastest growing service sectors in the world with annual growth rate of above 9 percent since 2001, which contributed to 57 percent of GDP in 2012-13. The Industry sector contributed 26 percent of GDP and agriculture sector contributed 17 percent. Agriculture sector’s contribution further declined to 15 percent in the year 2016. Out of the total population of 1.3 billion, close to 60 percent is dependent on agriculture for their livelihood. 60 percent of the country’s population contributes just 15 percent to the nation’s GDP which is clear imbalance. The Indian rural population is excessively dependent on agriculture for its livelihood. This results in under employment and low per capita returns.

Alternate employment opportunities should be created in rural areas without causing migration to cities. More skill development programs should be started to move a section of rural population towards non-farm activities and reduce overcrowding of agriculture sector.

India’s food grain production which was abundant after the implementation of Green Revolution has started slowing down now. All the fundamentals of agricultural production need to be reviewed with a new perspective to arrest the slowing down. International comparisons reveal the average yield in India is only 30 to 50 percent of the highest average yield in the world. There is a lack of availability of sufficient quantity of high yielding seeds, shortage of irrigation water, absence of effective local R&D to improve yields, manage soil fertility and guide farmers in proper crop pest management.

The organic carbon content of the soil is an important factor for the fertility of soil. Organic Carbon is improved in the soil by the application of cattle manure, green leaf manure, organic fertilizers, bio-fertilizers, crop residues and crop rotation with leguminous crops. These practices should be revived along with the conventional methods of application of balanced fertilizers and soil amendments.

Application of Nitrogen, Phosphorous and Potash fertilizers has to be in a balanced 4:2:1 ratio for getting good crop and good yield. In practice, farmers use excessive quantity of Urea (Nitrogen) and it leads to a skewed NPK ratio of 8:3:1 as noticed now. This practice leads to lower productivity of crop, high pest incidence and high pollution of water bodies with Nitrates and production of greenhouse gases like Nitrous oxide. Integrated Nutrition Management should be practiced for better crop yield.

Selection of seeds is an important function to get good yields. High yielding, disease and pest resistant varieties wherever available, should be used. While fresh hybrids have to be bought every year, in the case of local varieties and high yielding varieties, the seeds have to be replaced with new certified seeds at least once in 3 years to keep up the genetic purity. It is called Seed Replacement Rate (SRR). In order to prevent incidence of certain diseases, the Department of Agriculture advocates treating of seeds with some organic and nonorganic fungicides.

In order to save the crops from pests and diseases, integrated pest management practices as advised by the Department of Agriculture and other agencies are to be followed. Excessive use of pesticides leaves toxic residues in the produce causing health hazards and pollution to the environment.

Traditionally humans and draft animals met the farm power need. Draftability study of draft animals revealed that bullocks and the buffaloes pull about 10 percent of their body weight, camels about 18 percent of the body weight and donkeys about 34 percent. For the current level of intensive farming and required levels of productivity, animal power will not be adequate. The human power availability also is decreasing steadily. As a result, electro-mechanical sources supplement and substitute animate sources. For stationery operations like operation of irrigation pump, power thresher, a chaff cutter and grinder, engines and motors are in use. Whereas for tractive field operations like field preparations, planting, weeding and harvesting, there are tractors and power tillers run by diesel engines mounted on them. The average farm power availability in India has increased from 0.30 kW/ha in 1960-61 to about 1.8kW/ha in 2011-12. The ideal farm power need during 2020 would be around 2.0kw/ha.

India uses 2 to 4 times more water to produce a unit of a major food crop than China and Brazil. According to NASA, Indian water tables are depleting at a rate of 0.3 meters per year. An efficient drip/micro irrigation system reduces consumption of fertilizers, loss of water through evaporation and increases yield. Efforts are needed to improve ground water levels through rain water harvesting, discouraging of deforestation and increasing area under micro irrigation.

The above are some suggestions to improve agricultural productivity to meet the demands of the growing population. The population of India will continue to rise till 2050 leading to reduced per capita availability of food grains. This challenge is to be addressed with proper food production technologies.