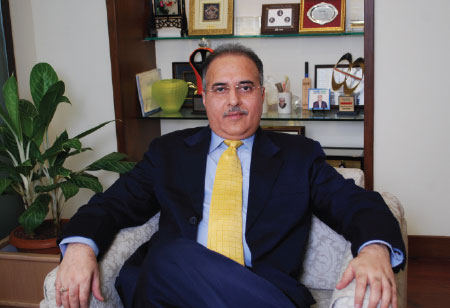 Broadly, as we all under st and, power is central to the socio economic development of the country; energy is directly linked to increased income and productivity, and indirectly to better health, education ,quality of life - human development in general, is the most plausible solution to address the multifaceted aspects of tackling poverty as well as the incubator of economic growth. At the inception of becoming one of the greatest economies of the world , Central Electricity Authority, Government of India anticipates India’s energy demand to increase by four-fold to about 690 GW by2035. With this, our country stands at this critical juncture to commensurate the rising4.2 percent energy demand with the energy generation. This directly underlines the fact that infrastructure would be instrumental in imparting elasticity to the supply factor. Presently, India’s current energy scenario gives rise to two key challenges for the power sector – the need to increase the generation capacity and expansion of the current transmission and distribution infrastructure characteristically Indian challenge have mostly veered around last mile issues despite supply side being available. Decentralized distributed generation (DDG) has the potential to solve both these issues, especially in the areas,which are semi-urban and rural.

"Technology can also pivotal in breaking challenges of lack of awareness as well as willingness of rural consumer to pay; improving the potential consumers base for distributed generation"

Conventionally, the approach for electrification has been to extend the national grid power plants operated by the national utility. The initial concept for large centralized power systems was focused on economies of scale provided by larger generating power plants, implemented first by developed nations. How ever, as opposed to the ground realities in developing countries like that of India, owing to the financial, technological as well as, organizational constraints, extending the central grid to the remote parts of the country is far too expensive and challenging.  Specifically, semi urban are as and rural electrification problems are challenging for the centralized utilities mainly on technical as well as economic grounds. With these urban and rural populations often dispersed, Some times in difficult topographies, makes the grid extension costs very high. Moreover, given that the stark disparity in income levels between rural and urban, the consumption at the initial years, household level tends to be lower. With high level of power losses and cost of connections, decentralized distributed generation for energy provision would certainly help in providing access to energy beyond the centralized electricity grid.

Technically  speaking, the approach for DDG enables small-scale technologies to produce electricity close to the end users of power. The technologies used often consist of modular (often renewable-energy based) generators, offering potential benefits like providing electricity at a lower cost with, higher power reliability and security, along with fewer environmental consequences than traditional power generators. DDG systems employ numerous, yet, small plants, providing power onsite, with minimal reliance on the central distribution and transmission grid thereby managing demand efficiently by generating power at the source of consumption. Moreover, the technology in use yields power in capacities that can range from a fraction of a kilowatt [kW] to larger utility-scale generation.

Previously, under Rajiv Gandhi Grameen VidyutikaranYojana (RGGVY), launched in 2005, the government level mini-grid policies and regulations attempted to fill supply gaps persisting in by extending grid infrastructure except for those remote areas where grid extension was deemed economically infeasible. These are as were designated as off-grid, and solutions such as mini-grids was first encouraged via the Decentralised Distributed Generation (DDG) Scheme, which was laterrevised in2013, providing more clarity and transparency in the system. Undoubtedly, the mini- grid infrastructure has evolved, with the Deen Dayal Upadhyay Gram JyotiYojana (DDUGJY) for extending the legacy grid.  Evidently, with several important developments at the national and state level, the conversations amongst the central and state government has considerably advanced, that has brought mini-grids to a more significant role in the national conversation, regarding rural electrification.

India’s proclamation on the world stage, back in December 2015 Paris Conference (COP 21), of achieving 40 percent cumulative electric power installed capacity from non-fossil fuel based energy resources by 2030 -earmarked a new dawn, the path of clean energy and sustainability. Given that coal-fired electricity generation capacity, around 113 GW of new capacity is already under construction with another 205GW of existing capacity, is expected to remain the dominant fuel in the country’s quest for providing power to all. More over, India’s  percapita consumption being just about  1,000 kWh/ year; competitive as well as distributed format of generation would be critical to the success of the Indian power sector, in addition to traditional thermal generation.

Notably, sustainable development requires a well developed infrastructure and a substantial number of high‐value‐added industries.  Thus, emphasis on ICTs should be regarded as an enabler and catalyst for implementation of DG.  At present, the diffusion of ICTs infrastructure would help in addressing the conspicuous urban-rural divide. Enablers like rapid technology cost reductions, increasing economies of scale and more competitive supply chains are expected to make such energy options more competitive. For this, data collection, database development and analysis would help increase interest in rural distributed generation entrepreneurship. There is a growing interest in developing technology customizable to the needs of the community - additionally, service providers seeking ways to develop technology with the feedback from local communities. Technology can also pivotal in breaking challenges of lack of awareness as well as willingness of rural consumer to pay; improving the potential consumers base for distributed generation. Furthermore, elimination of middle men as well as extending banking and credit facilities, would be another encouraging factor.

In terms of social development, the availability of clean distributed electricity not only helps households avoid the health risks associated with conventional forms of distributed energy, by doing away with kerosene, charcoal, and disposable batteries, but also helps reduce cost of grid infrastructure development.

Traditionally, industry has opted for captive fossil-fuel based power generation to ensure reliability. However, options as bagasse (waste from sugar industry) cogeneration are one of the finest examples of successful implementation of co-generation technology where in the waste of the industry is used in powering the industry.