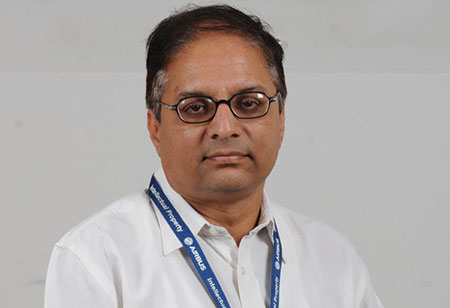 In 1998 Volkswagen outbid BMW for the automobile assets of Rolls Royce & Bentley, owned by Vickers plc and bought them for about $750million US. VW realized only after the deal closed that the purchase didn’t include the right to use Rolls Royce name or logo. A stipulation in the ownership documents of Rolls-Royce dictated that Rolls-Royce plc, the aero-engine maker, would retain certain essential trademarks, including the Rolls-Royce name and logo if the automotive division was sold.

Although Vickers plc sold the vehicle designs, nameplates, administrative headquarters, production facilities and Rolls-Royce grill shape trademark to Volkswagen AG, Rolls-Royce plc licensed the Rolls-Royce name and logo to BMW AG, because Rolls-Royce plc had recently had joint business ventures with BMW. Immediately after the deal was closed, BMW communicated to VW that VW could use the RR trademark only until 2003. A subsidiary of BMW has been making the cars branded Rolls Royce since 2003.

In short, VW paid a huge sum of money for all of Rolls Royce Motor Company except the most important thing they wanted, the RR trademark.

An intelligence function selects, collects, interprets and distributes publicly-held information that has strategic importance. Intelligence differs from information as it requires some form of analysis. Analytical process transforms scattered competitor information into relevant, accurate and actionable strategic knowledge about competitors’ position, performance, capabilities and intentions. It is usually highly specific and timely information.

The objective of competitor intelligence is not to misappropriate a competitor`s trade secrets or other proprietary information, but rather to gather in a systematic, legal manner a wide range of information that when collated and analyzed provides a fuller understanding of a competitor firm's structure, culture, behavior, capabilities and weaknesses.

Competitive Intelligence involves some important questions about the competition:

• Planned products and timing of their release

Resulting in the answers to the following question for our own organization:

• Where in the market do we want to compete?

• Can we compete with new business lines or should we acquire another company to establish our market presence?

When analyzing technological development in a field, the first concrete evidence of a new product or industrial process may be a published patent document, often a patent application. Patents and other forms of Intellectual Property are often good indicators of what competitors are involved in.

Intellectual Property usually has three broad functions within a corporation:

• As a tool to protect price and market share by excluding others from a specific marketplace (patents) and as a guarantee of channels to market and goodwill (trademarks).

• As insurance against legal action by other patent holders, operating to mitigate risk of infringement.

• As a financial asset in the high-stake game of strategic alliances, in which technology is licensed, swapped, assigned, mortgaged, or held as a blocking strategy.

From looking at the published patent documents of the competitors, estimates may be made of their strategies about all the three above functions.

From the published patent documents one can also :

• Know about new or potential competitors or collaborators

• Map the density and frequency of patent filings across all technologies for a competitor, revealing the focus and intensity of their research efforts.

•Detect gaps in competitors’ IP portfolios, and consequent need to license or partner.

• Patent family searches (and also trademark searches) indicate the segments of the international market the competitor is targeting.

• Temporal profiles for patent filings may show a competitor is abandoning a particular field or is getting more active in another one.

• Citation searches may reveal competitors "patenting around" a patent portfolio, filing improvements to a rival's product line, as we will see in case of Boeing and Airbus in the area of Flight Physics, in a following article.

A glance at the Front Page of a Patent can Reveal a Great Deal about the Quality of the Document.

For example, if the patent is held by a private inventor, there is a probability the invention was not the result of a well-funded R&D program. If the inventor himself/herself drafted the patent (indicated by lack of a legal representative) then there is a strong chance it is not really of much value.

If the priority filing has been followed by many additional international filings, this would mean thatconsiderable funds have been expended forpatent filings, indicating some confidence in the technology. Similarly, a large patent family with many continuations and continuations-in-part and many inventors also indicates a well-funded research program.

Reviewing the legal history of a patent portfolio, as well as the infringement, opposition, re-examination, and other IP and trade-related litigation pursued by a company, indicates the company’s degree of enforcement.

An IP Intelligence professional also looks for descriptive clues regarding a company`s technological trajectory and the markets it is concentrating on, as well as commercial opportunities presented by expiration of patents held by rivals.

In Technology driven marketplace of today, when most of the value of the companies lies in intangible assets, Intelligence of the Intellectual Property of the competitors is even more valuable than other kinds of Competitive Intelligence.